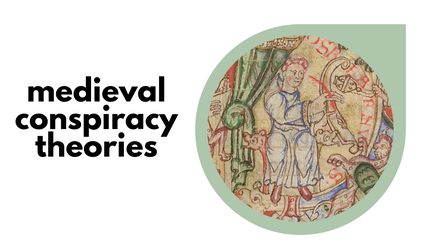 MEDIEVAL CONSPIRACY THEORIES SERIES
The Legend of Pope Joan | Nathan
​Aired: 22 September 2018
​
One of the most famous stories about the medieval papacy is that, supposedly sometime in the 9th or 11th century, there was a woman named Joan who disguised herself as a man and became Pope John.  While it might sound like a modern, anti-Catholic creation, this story was actually invented in the Middle Ages. In this episode, Nathan returns to the realm of medieval conspiracy theories to talk about the medieval origins and development of the myth of Joan, as well as the social role of conspiracy theory.

What if everything you ever knew about history and classical literature was fundamentally wrong? What if there were a massive conspiracy, set in motion by medieval monks, to create entire bodies of literature and claim they were much older, or to invent centuries of history? In this episode, we trace the pseudo-history of the great "monastic conspiracy" from its origins in the writings of a French Jesuit in the 17th century to the bizarre New Chronology of a Russian mathematician in the 20th.

The Husband-Killing She-Wolf: The Life of Joanna of Naples | Nathan
Aired: 20 July 2013

Joanna I of Naples led a fascinating life marked by both triumph and tragedy.  Orphaned as a child, married four times, and rumored to have had her first husband killed outside her own bedchamber, she was a controversial figure even in her own day.  Join us as we examine the ups and downs of one of the most powerful (yet oft-forgotten) women of the fourteenth century.

What do medieval frat boys, Nicholas Cage, and Iron Maiden have in common?  They're all part of one of the most popular (and far-fetched) medieval conspiracy theories.  Tune in as we talk about Cathars, Templars, and the siege of Montségur.