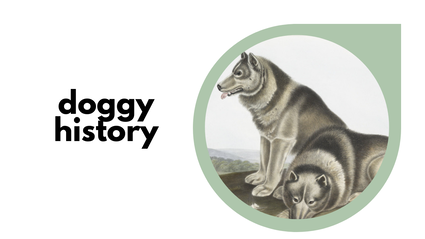 King John and His Dogs | Kristin
​Aired: 20 April 2019
​
King John is often remembered as one of England’s most inept and disliked rulers. By the time he was forced to sign the Magna Carta in 1215, John lost authority, territory, and a lot of friends. Some, however, did remain loyal. In this week’s episode, Kristin looks at King John and his dogs.

The first animals to be domesticated, for centuries dogs helped their humans conquer the world. So perhaps it was only natural, as humans began to look toward other worlds, that their minds turned back to their first and most loyal companions. In this installment of Doggy History, we will examine the heroic animals (canines and others) sent into space during the mid-20th century.

Each year in early March, professional mushers and their dog teams converge on Anchorage, Alaska to run the Iditarod, a grueling race to Nome, more than 1,000 miles away, ostensibly in commemoration of the 1925 "Great Race of Mercy." That first "race" consisted of heroic dogs and sledders who rushed diphtheria serum to the stricken city, and ensured the sled dog Balto his place in doggie stardom (and a statue in Central Park). but the Iditarod's legacy has not been free of controversy. Join us as we explore the guts, glory, controversy, and fluffy protagonists of the long history of dug mushing, and examine the shifting relationships between  human and canine that made it possible.

Last week Esther and Christina began their crossover of our Doggy History and Film History series. Today, because there is more to the history than Lassie and Rin Tin Tin, they continue their exploration of dogs on screen and answer the question, why is there continuing human fascination with capturing dogs on camera?

From Edison Studios’ nineteenth-century “actualities” to present day internet videos of twerking Corgis, dogs’ presence on film is as old as the medium. Join Christina and Esther in part one of this special joint edition of Doggy History and Film History as they consider archetypal film dogs – doggy actors, heroes, athletes, villains, and victims, and learn about the role canines played in shaping the film industry and its practices.

Head to a dog park and you’re sure to see a greyhound, a pug, or a German Shepherd.  Which one is most closely related to the wolf?  The answer may surprise you. Through concentrated effort across continents and centuries, humans manipulated canine raw material into made-to-measure companions.  In this installment of Doggy History, we will consider the origin and evolution of three popular breeds, and along the way learn about the process by which humans sought to remake dogs in their own image.

They are warm, fuzzy beings that come in many different shapes and sizes, yet they all sense our emotions and thrive in our company. But they are also descended from wolves, fierce and elusive social predators. How did dogs become so integrated into human society? And how can we reconstruct any species’ prehistory? In the first installment of our new Doggy History series, we examine theories about how dogs left the wolf pack and became part of ours instead, and find out that humans have been blaming it on the dog pretty much forever.