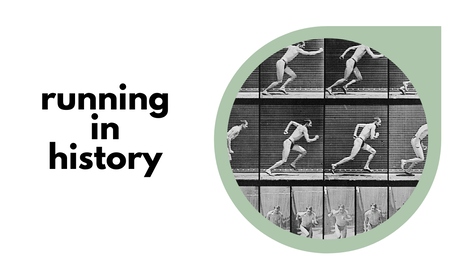 How did an unassuming office assistant from New York fool her way to the winners' circle of the 1980 Boston Marathon? The first major cheating scandal in long-distance running had nothing to do with drugs or endorsement deals, but with the shameless moxie of a woman whose journey into cheating infamy was probably more accidental than intentional.

Country roads were rough, tough, and uneven. But the agile, handsome, and (sometimes) opulently dressed running footmen traversed these treacherous roads to scout, deliver messages, and honor their masters with their ultramarathon endurance. Holding a staff, an egg, and maybe a little white wine, was the running footman the first professional runner of the modern age?

The Origin of the Marathon: Linking Past to Present | Esther
Aired: 17 August 2013

The story of the most popular long-distance event, from its origins in ancient literature to the first modern Olympic Games in 1896, and how a young farmer, Spyridon 'Spyros' Louis (1873-1940), became an unlikely national hero.

How did the Greeks monitor foot races during the ancient Olympic games without technologies such as timex watches and slow-motion cameras? They certainly weren't worried about doping, but there were other ways runners could gain unfair advantages over their competitors.

Pre-Historic Runners and the 'Fall' of the Neanderthals | Esther
Aired: 30 March 2013

Did you know that our homo sapien ancestors were altogether skinnier, weaker and dumber than our fellow hominid relatives, the Neanderthals? Some theorize that it was running that saved us from extinction. Huh?