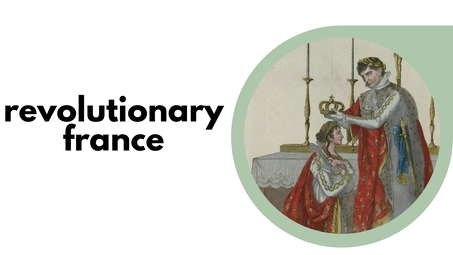 Divorcing in Revolutionary France | Christine
Aired: 20 March 2021
​​
During France's long revolutionary period, a lot of things changed,  including how you could end your marriage. In this episode, Christine takes a look at the introduction of divorce in France, including some of the ways you could (and couldn't) legally split from your spouse from the dawn of the French Revolution through the Napoleonic years and beyond.​

Marie Louise: Napoleon's Second Empress  | Christine
Aired: 28 November 2020
​
Archduchess Marie Louise of Austria became Emperor Napoleon I of France's second wife in 1810, only a few years before he was overthrown. This episode covers the ups and downs of Marie Louise's life before, during, and after her time with Napoleon.

Revolutionary Notre-Dame de Paris | Christine and Elizabeth
​Aired: 24 August 2019
​
In April 2019, a fire at the French cathedral Notre-Dame de Paris had people around the world glued to their news feeds and televisions. Join Christine and Elizabeth for a discussion about some significant events that took place at Notre-Dame during one of France’s most turbulent periods, the span from the French Revolution to the exile of Napoleon III.

How to Avoid Serving in Napoleon's Army | Christine
​Aired: 11 August 2018
​
Napoleon Bonaparte built his career and maintained his empire with soldiers at his back. Often, the fate of the France  seemed to hinge on his military success, but that did not mean every man in the country was eager to join the fight. In this episode, Christine looks at some of the ways men avoided serving in Napoleon's army.

December may be a celebratory time for many, but in 1800 it caused Napoleon Bonaparte a giant headache. This episode is all about the attempted Christmas Eve assassination of France's future emperor.

What happens when one of the most powerful men in Europe ends your marriage? What do you do when you are replaced as Empress of France? In this episode Christine delves into Josephine Bonaparte’s life as the ex-wife of Emperor Napoleon.

The Second French Empire has fallen and Empress Eugénie fled to England, but what happened next? Today we conclude our look at her life in exile, including her reunions with Napoleon III and their son, as well as the lasting piece of French imperialism she established in the English countryside.

When Napoleon III’s French Empire began to crumble in the late 19th century, his wife was trapped in Paris. Who could possibly help the Bonaparte Empress flee before the mobs got to her? An American dentist named Thomas Evans, of course. We’re kicking off the new year with a podcast about escapes and unlikely allies!﻿

May 29, 2014 marks the 200th anniversary of the death of Empress Josephine, first wife of Napoleon Bonaparte. Josephine’s life did not begin when she married the famous Corsican so this week, to honor her, we are looking at the time before she became a Bonaparte. Join Christine as she explores the years when Josephine answered to a different name, had a husband named Alexandre, and almost became a victim of the Reign of Terror.

What on earth is a city of smugglers? Why did Napoleon like to tease his Second Consul so much? And what would you have seen if you attended Napoleon’s coronation? This week we move beyond Napoleon the man to the experiences of his subjects answering these questions and more!

It's Bastille Day weekend so we make a return to France for today's topic.  In the third installment of our Revolutionary France series, we'll talk about the scandals, intrigues, and tragedies of Napoleon and his inner circle.

The French Revolution: Part II | Nathan and Christine
Aired: 4 May 2013

Picking up where they left off at the end of Part I, Nathan and Christine tackle actors' rights and changing fashions while wondering if anyone truly understood the Republican Calendar. Join them as they conclude the countdown of their top ten favorite stories and idiosyncrasies of the French Revolution.

The French Revolution: Part I | Nathan and Christine
Aired: 6 April 2013

From Marie Antoinette's fake peasant village to Robespierre's botched suicide, the French Revolution is full of fascinating stories that are often omitted from textbooks. Join Nathan and Christine for part one of a two part countdown of their favorite quirky aspects of this vibrant period.